Biosan Biomedical Investment and Industry was founded by Turkish and German doctors and German Development Bank DEG partnership in 1986 (Biosan was the only health institute outside Germany which the German Development Bank has become a partner). In 1987 the first stone breaking from outside of the body equipment (ESWL) has been opened by the former Ministry of Health and started to treat patients. ESWL treatment method began to be used at a state institute (University Hospital )in our country two years after it started to be used in Biosan. 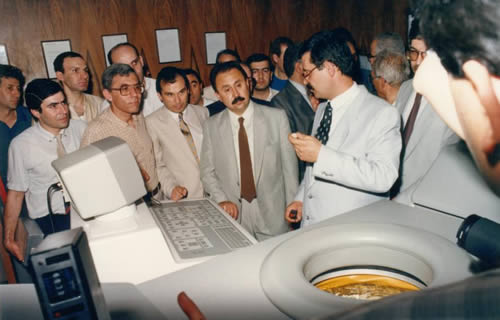 In 1990 at ESWL congress in Washington USA, Biosan was declared as one of the two health centers in the world which has succesfully completed the most number of child stone treating cases. (The other center is a German University Hospital). The same year Dr. Mahmut TOLON was invited to China by Akademia Sinica (Chinese Science Academy) and he has gone to Beijing as the first Turkish Doctor who has been invited.

The special exercises which have been developed in our center for pouring down the broken stone pieces after ESWL treatment has been named as Biosan Positions in worldwide medical literature.

After Biosan Health Center has been founded, it has initiated various stone treatment centers (Can Medical in İzmir, Biotaş and İstanbul Stone Treatment Clinic in İstanbul) and has later transferred the ownerships of these centers to their workers. Also, many doctors and health professionals who work in these centers have been trained by Biosan.

In 1999 after Dr. Jutta TOLON and Dr. Mahmut TOLON have retired, Biosan Health Center with it’s personnel and medical equipments have merged with Depar Tourism Health Investments Company (under the name of Private Biosan Polyclinics).

Since 2005, the Private Biosan Polyclinics is treating its patients by using shock waves from outside of the body (ESWL-ESWT) with Piezolith 3000 device.

You can find answers to your questions about urinary system.

Kidney stones in children is very common (17% of the stone patients are children) in our country.